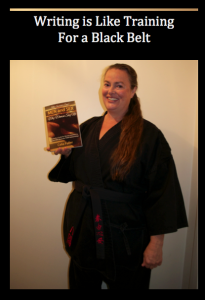 During my recent trip through Europe with my first book, I came to realise that the sheer magnitude and effort put into writing a book is similar to the years I spent training to be a Black Belt in the Hung Suen Wing Chun Kung Fu system. The similarities to achieve both those goals are endless.

My brain exhausted from all the steps I have walked up in France reminded me of the mountain of work I have put into writing, editing, researching and finally publishing. They also remind me of the earlier weight training, gruelling sparring rounds, at times seven days a week training schedule, mountain climbs and injuries I had to process through to finally reach my black belt goal. No one could do either of these tasks for me, some how I had to find the focus to finally put my dreams into action. On both occasions it has taken procrastination, a private dare and then the need to seek out the professional mentors who would guide me on the correct path.

My Kung Fu Master will be the first to admit that he did not make me a Black Belt. I did that myself but what he provided was an environment where I could gain many of the tools through his instruction, be part of a team all moving through towards the same goals and finally seeing other people achieve before me as a path of inspiration to keep going. Added to that I had to find an inner reservoir of strength, patience and persistence to achieve each gaol as it arose, not to mention a few private session to fine-tune my abilities. Some situations that eventuated I did not even anticipate would be an issue ended up causing me to question my choices to keep going. Injuries were one of them including, black eyes, blows to the head and near knock-outs. Of course this was not often, but enough for someone who was over forty and responsible for kids and running a business, to second guess my choices. My mind tried to be my enemy, at every turn, attempting to convince me to stop. The mind became my biggest battle-ground not the training schedule.

This has been the same for the book writing process. When the going gets tough and out of hand my mind tells me to “Forget it”, “ You don’t need the stress,” “Your life is good without the books so why push yourself like this?” Yet somehow I kept pushing on. Reflecting on my achievements I realised the sheer determination and discipline to push through with my books against so many barriers and issues were actually qualities cultivated when I went through my Kung Fu training. All those years of retraining my brain, actually aided me in pushing through with completing my books.

Added to that I went into a mentorship programme that held what I thought was a lot of promise but found it ended up being, not exactly as I first thought. I already had multiple books partially written but did not quite know what to do next. The mentorship created a platform of some knowledge on the subject, enough to get me started and once started, I could smell the success in the air and found I pushed on even when I did not feel the support was fully behind me or provided what I believed I paid for. But perhaps it actually did, because it led me towards a general path of knowledge, gave me the belief I could succeed and placed other people who also had published within my sphere of interaction, all which helped galvanise my mind into action. In the end however, it was up to me to make it happen just like was with my Black Belt. A mentor cannot do it for you. When you want to achieve anything in life you must be your own Master and Commander. Others just show it is possible.

For me, I would love to think that achieving a black belt as a middle aged, overweight women pushing the boundaries of an extremely physical pursuit, can give rise to some inspiration within others. Knowing that this path also helped my mental capacity and belief in oneself to then go onto claim authorship status has excited and inspired me and I can only hope my life can encourage others to also pursue their dreams.

Life is a Maze but can be AMAZING!

Life is ‘a MAZE’ but Can be Amazing Break Free of the ‘Tic Toc’ World & Your Limiting Beliefs How did we get here? Why do we do the things we do? What propels us forward into action? All these questions,  yet the answers are not always forthcoming or not as much as we would […]

Dreams are Like Boomerangs, They Will Always Come Back When we dream, a thought form is created from our deep imagination couched within our soul. The dream is formulated and embedded with thoughts, feelings, desires and potential outcome. In fact every thought we have that is filled with emotion becomes a dream. Sometime colourful and […]